A border laden with strawberries surrounds this charming sampler which features the Liverpool Exchange and two girls. Sarah has recorded that she “finnished” her work in 1835. Unfortunately, there is no trace in family history records of a Sarah Howarth being baptised in the City of Liverpool in the relevant decades of the 1800s. Howarth is a surname of Anglo-Saxon origin most commonly found among families originating in the English counties of Yorkshire and Lancashire, especially around the village of Great Howarth near Rochdale, Lancashire and Haworth in Yorkshire.

Situated above the Worth Valley on the edge of the bleak Pennine moors, Haworth is internationally famous for its connection with the Brontë sisters. They wrote most of their novels at the Haworth Parsonage while their father was the incumbent parson at Haworth church.

Sarah’s surname is found in a variety of different interrelated spellings, including Haworth and Howorth. We have researched these variations without success and suspect that our Sarah’s family moved to Liverpool during her childhood.

Sarah’s sampler features two red carnations, a large pink rose and two anemones. Carnations are rich with symbolism, mythology and in the language of flowers the carnation’s meaning is determined by its colour. Light red symbolises admiration, while dark red represents deep love and affection. White carnations suggest pure love and good luck, purple carnations imply capriciousness, and pink carnations carry the greatest significance, beginning with the belief that they first appeared on earth from the Virgin Mary’s tears, making them the symbol of a mother’s undying love.

Anemones are part of the buttercup family and are also known as windflowers. Anemone comes from the Greek word of the same spelling, which means “the wind’s daughter.” It is the combination of “anemos”, the word for wind and the suffix “one”, which indicates a daughter. It gained this name because of myths involving the Greek gods of the four winds, but the meanings of the flower are also tied to the story of Adonis and Aphrodite. The Goddess of love kept Adonis as her companion for too long and the other gods killed him, so she wept over his grave and her tears for her fallen love grew into anemone flowers.

The Greek myths lend the anemone flower dual meanings of the arrival of spring breezes and the loss of a loved one to death. The Victorians took a slightly different slant on the loss embodied by the flower and used it to represent a forsaken love of any kind in their intricate Language of the Flowers.

Sarah’s sampler in which she portrayed the Liverpool Exchange has been lovingly sitched by Melissa Coyle. At the very core of Hands Across the Sea Samplers there is a team of needleworkers who are passionate about antique samplers and being able to share those samplers with you.

Make 4 interest-free payments of $10.62 fortnightly and receive your order now. 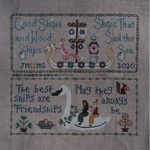