The story of Cominos House

Cominos House is certainly one of the most well-known and best-loved buildings in the Far North Queensland City of Cairns, Australia.

The original high set timber home was built on the corner of Abbott and Florence Streets, on the then outskirts of Cairns. Early council records indicate that the house existed on the property in 1886. Architectural features, such as the 'Union Jack' verandah balustrading, suggest that the house was built in the 1880's and is the house we now know as Cominos House.

The house was built by Mr. Alfred Street, a builder and member of the first Cairns Council and, after changing hands a number of times, was sold to Mr. George Comino in 1927. Mr. Comino arrived in Cairns in the early 1900's and established a cafe in Abbott Street. Mr. Comino subsequently changed his name to Cominos and his children have remained in the area.

The property remained with the Cominos family until 1988, when the land was sold for development. The timber home was offered to the Cairns City Council for relocation, and was moved to its present position on the corner of Greenslopes and Little Streets for use as a community centre. It is currently being conserved as authentically as possible and maintained by 'Friends of Cominos House'.

Make 4 interest-free payments of $2.75 fortnightly and receive your order now. 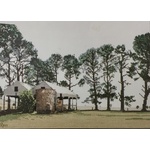